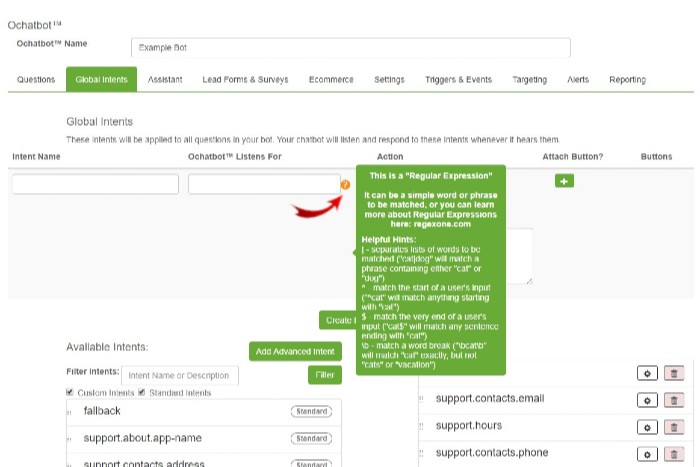 Hover your mouse over the “?” icon next to the listeners field to show the quick guide to RegEx for easy reference when creating your intents.

You can test your Regex in Ochatbot or learn more and test here https://regex101.com/

Here are some of the most basic and useful regular expressions and examples:

The “.*” allows you to create a wild card

The \s is a literal space between two words.

The following characters are the meta characters that give special meaning to the regular expression search syntax:

Example: The regex “aa\n” tries to match two consecutive “a”s at the end of a line, inclusive the newline character itself.

^ the caret is the start of line anchor or the negate symbol.

$ the dollar is the end of line anchor.

Example: “^b$” matches the empty line.

{ } the open and close curly bracket are used as range quantifiers.

[ ] the open and close square bracket define a character class to match a single character.

The “^” as the first character following the “[” negates and the match is for the characters not listed. The “-” denotes a range of characters. Inside a “[ ]” character class construction most special characters are interpreted as ordinary characters.

Example: “[a-z]” matches any lowercase characters in the alfabet.

Example: A search for “[][()?<>.*?]” in the string “[]()?<>.*?” followed by a replace string “r” has the result “rrrrrrrrrrrrr”. Here the search string is one character class and all the meta characters are interpreted as ordinary characters without the need to escape them.

( ) the open and close parenthesis are used for grouping characters (or other regex).

The groups can be referenced in both the search and the substitution phase. There also exist some special constructs with parenthesis.

. the dot matches any character except the newline.

Example: “.a” matches two consecutive characters where the last one is “a”.

* the star is the match-zero-or-more quantifier.

+ the plus is the match-one-or-more quantifier.

| the vertical pipe separates a series of alternatives.

< > the smaller and greater signs are anchors that specify a left or right word boundary.

– the minus indicates a range in a character class (when it is not at the first position after the “[” opening bracket or the last position before the “]” closing bracket.

& the and is the “substitute complete match” symbol.

I’m still a little overwhelmed by all of this so far. Can you help?

That’s very understandable if you are new or unfamiliar with any type of coding. Try visiting https://www.w3schools.com/ and search “regular expression” in the search bar for more detailed information. If you are still having trouble, contact Support and we will assist you the best we can.

We Are Here to Help

Here are the different ways you can contact support: